Known as the “Nation’s Oldest City,” St. Augustine is the longest continually inhabited European-founded city in the U.S. St Augustine is a place for history buffs, golfers, shoppers, and everyone else.

St. Augustine’s rich heritage makes the city and its surroundings a unique getaway for visitors. Founded in September 1565 by Don Pedro Menendez de Aviles of Spain, St. Augustine, known as the "Nation’s Oldest City," is the longest continually inhabited European-founded city in the United States. Dive into more than four centuries of history with notable Spanish, English, Greek, Native American, and African American influence. Stroll the narrow lanes, enter the many museums, and visit landmarks such as Castillo de San Marcos, Ponce de Leon's "Fountain of Youth," and the Oldest Wooden Schoolhouse.

Located 20 minutes northwest of St. Augustine’s center is World Golf Village, a 6,300 acre premier golf course community. World Golf Village neighborhoods offer access to thousands of acres of nature preserves, spectacular amenities, and numerous shopping options. More than 44% of the community’s lands are nature preserves which serve as a beautiful backdrop for any home. Resort-style amenities include a heated Junior Olympic-sized pool, a beach-entry pool, tennis courts, and clubhouse with an adjoining fitness cottage. World Golf Village is also home to two championship golf courses, the World Golf Hall of Fame, and a AAA Four-Diamond Resort. The St. Augustine Premium Outlets are a shopper’s delight and offer nearly 100 stores with brand names such as Coach, Nike, and Polo Ralph Lauren. St. Augustine – a place for history buffs, golfers, shoppers, and everyone else.

$224,900
2 Beds ⋅ 2 Baths ⋅ 1201544 MLS
Make this two bedroom, two full bathroom your own! Located in the desirable St. Augustine area, close to downtown and the beach! Located on the 1st floor, this condo features an open kitchen/dining/living room concept, including a large built in china cabinet. The unit has laminated flooring in the living area for easy upkeep. There is a large porch with windows for year round enjoyment. Both bedrooms have access to a full bathroom with one of them being a tub/shower. Home is owner occupied, could use some TLC, waiting for your personal touch! The Conquistador complex in located on the intra-coastal waterway. The area offers 3 swimming pools, golfing, walking and bicycle riding trails, car wash, tennis courts and fishing pier.

$575,000
3 Beds ⋅ 1 Baths ⋅ 1203135 MLS
Check out this adorable cottage in the uptown area of downtown St Augustine (Magnolia Neighborhood). This property is a great investment opportunity (Short Term Rental), or for owner use, as it is zoned commercial and allows for nightly rental possibilties. It includes three parking spaces with the one car garage driveway. This house is super cute from the outside to inside and has an expansive backyard and lot, even enough room to add a pool if you so choose. This adorable home is located 6 minutes from the historic area and 7 minutes to Vilano Beach, where you can find the beach access and a town center with shopping and restaurants. This home is priced to move so please send this listing to your Realtor and have them set up a showing immediately.

$549,900
2 Beds ⋅ 2 Baths ⋅ 1203121 MLS
This home will surprise you with the space available to add your personal additions of bedrooms and bath within the current footprint of the home. Located in the City of St. Augustine with easy access to downtown, shopping and a short drive to beautiful white sandy beaches . This Craftsman home currently features 2 spacious bedrooms with a bath. Renovation list include Kitchen, AC, Bath,Windows and new roof, just to name a few. Large living room plus a spacious formal dining room is just the beginning. Well appointed custom kitchen for the most demading chef. Beautiful Craftsman wookwork thru-out. Additional 600 sq ft building for office or art studio. And don't forget the 4 car garage with 12' ceilings for storage space. Completely fenced with wlectronic entry.

$519,900
4 Beds ⋅ 3 Baths ⋅ 1203098 MLS
Why buy new when you can move right in to this quality home with upgrades galore! All new stainless steel appliances including the washer/dryer, new epoxy flooring in garage and screened-in lanai, new custom horizontal blinds on large sliding glass door, new storage cabinets and shelving in garage, new fan and light fixtures throughout, and so much more! This 4 bedroom home with a dedicated office also boasts a large kitchen island that is a wonderful place to gather with family and/or friends. Did I mention the Hydro Quad Water Softener and UDI Water Purification System? The seller is also leaving 3 wall mounted TV's for the new buyer to enjoy.

$429,500
3 Beds ⋅ 2 Baths ⋅ 1203094 MLS
Great property you don't want to miss. This ranch style rock and coquina block home is a must see! Great for an empty nester, a family or simply a great investment in one of Florida's fastest growing areas. Home has hardwood floors as well as waterproof vinyl. This property is energy efficient with a metal roof to withstand any weather. St Augustine is one of Florida's best tourist locations with the finest beaches and attractions.

$1,087,000
4 Beds ⋅ 4 Baths ⋅ 1203068 MLS
Just built ! Move in ready! Come see this beautiful 4 bed / 3.5 bath home on Anastasia Island. Built on a large high and dry lot! Plenty of room for a pool! Step into the kitchen to find stainless steel appliances, soft close white shaker cabinets, beautiful back splash and quartz countertops. Laminate flooring throughout. Enjoy reading your favorite book and drinking coffee on your paved back patio. This home has views of downtown , the lighthouse, and the Intracoastal. Short term weekly rentals allowed. Bring your boats and Rv's there is no HOA. Take a short bike ride to the historic downtown, Anastasia State Park beach, St. Augustine Amphitheatre, farmers markets, Lighthouse boat ramp, and restaurants!

$320,000
3 Beds ⋅ 2 Baths ⋅ 1203055 MLS
PRICED TO SELL! Welcome to this 3 bedroom 2 bathroom well maintained home. In the heart of the Samara Lakes neighborhood that offers superior amenities for the whole family and ''A'' rated schools. This home comes with a brand new privacy fenced back yard, new gutters, vinyl plank modern flooring through out, 2020 air handler & condenser, and no CDD fees. The community offers easy access to major shopping and interstates. Schedule your tour today!

$439,500
3 Beds ⋅ 3 Baths ⋅ 1203027 MLS
This 3 bedroom 2.5 bathroom PLUS OFFICE one story home in Creekside at Twin Creeks is a must see! Sit on your front porch and face nature preserve, no home across the street! Enjoy the luxurious, expansive, and beautifully lit home with Stainless-steel Whirlpool appliances, gorgeous quartz countertops, and more. This home boasts a lovely master suite complete with its own walk-in closet and bathroom. Home features a covered back patio perfect for enjoying the lush backyard. Gain access to amazing amenities like resort-style community pool, fitness center, walking/biking pathways, and playgrounds. Zoned for A Rated schools! A short drive from shopping, Saint Augustine, the beaches, and more this home will give a feeling of living like you're on vacation.

$1,199,990
4 Beds ⋅ 4 Baths ⋅ 1203000 MLS
Gorgeous ocean view home! This stunning property features luxury vinyl plank flooring, an elevator to easily access the 3 floors, a 3 car garage, and updates galore, including replaced AC units. The gourmet kitchen boasts granite countertops, stylish 2 toned cabinetry, built in oven and microwave, and plenty of counter and cabinet space. Outside, take in views from the private balconies, or warm up by the built in fire-pit. In addition you'll enjoy a private beach access, and the ability to use the home as a short term rental if desired. Worried abut tracking in sand from your play day at the beach? No need, as this home is also equipped with an outdoor shower! Come check this one out for yourself and see what luxury beach living is all about!

$853,990
5 Beds ⋅ 4 Baths ⋅ 1202992 MLS
Come home to BOCA II F floorplan on Lot 588 Ready 2023 in the new GATED community of Silverleaf. Home is located on a pond with too many upgrades to list. The amenity center has something for everyone. Spacious 4-5 bedroom home, with the majority of the living space on the main floor. Close proximity to the 9B Connector and I-95. Walk or bike to dining and shopping.

$549,900
2 Beds ⋅ 2 Baths ⋅ 1202961 MLS
This house has just been beautifully remodeled from top to bottom. It is zoned for weekly rentals so you can make into a vacation rental or turn this into your own downtown residence with a superb location. Right in the heart of Linconville and walking distance to all of the incredible restaraunts, bars, and shopping that St Augustine has become famous for. This home has designer touches throughout and leaves nothing for you to do except move right in. Please don't miss your chance to see this home, send this to your Realtor right now to set up a showing. New roof, new elctrical, new plumbing, and new HVAC system. Windows are also new along with new luxury vinyl plank flooring.

© 2022 Northeast Florida Multiple Listing Service, Inc. All rights reserved. This data is up-to-date as of . For the most current information, contact Real Estate Company. 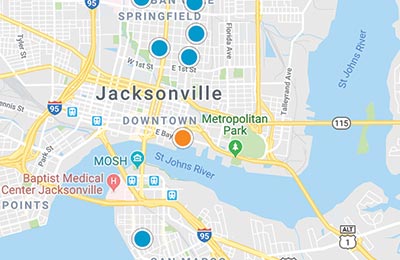